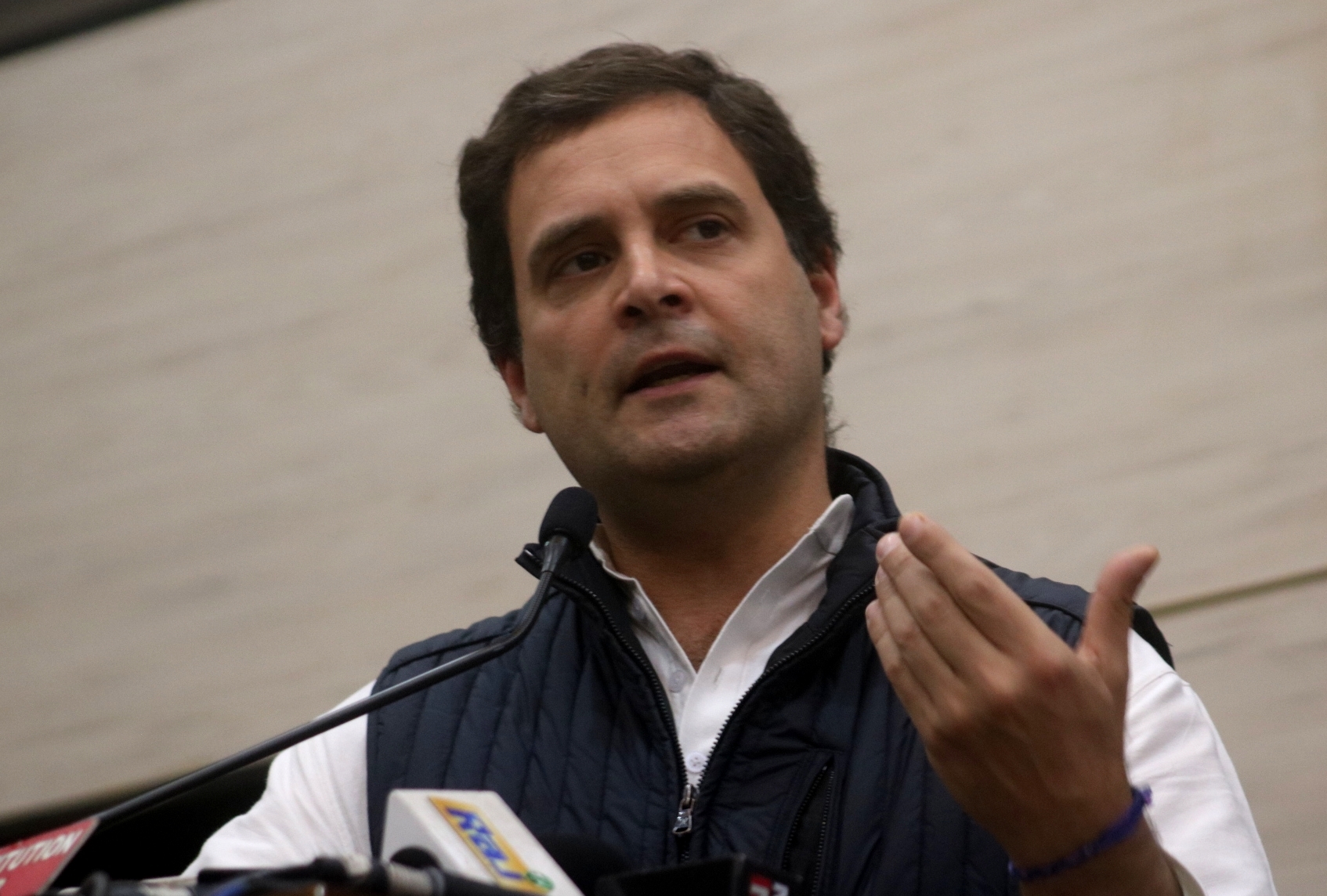 New Delhi, Dec 28 (IANS): It was a year Congress President Rahul Gandhi came into his own as a campaigner and strategist, emerging as a powerful voice in the opposition against Prime Minister Narendra Modi.

He also earned his electoral spurs in tough Hindi heartland battles, helping his party win three states that will have ramifications in the Lok Sabha elections a few months away.

Rahul Gandhi began the year as Congress President, having taken over the post from his mother Sonia Gandhi last December at the culmination of party’s organisational elections.

The path was full of challenges as barring Punjab and Puducherry, where it had stormed back to power as also Karnataka — where it is the junior partner in the ruling colaition — the Congress was virtually starved of electoral victories since its Lok Sabha debacle in 2014. It had also not beaten the BJP in a straight contest anywhere in four years.

Gandhi went about the task methodically by identifying weaknesses and bridging gaps. He sought to beat Modi at his own game by expanding social media outreach and connecting with the audiences through witty, hard-hitting tweets and posts.

Gandhi consistently attacked Modi on issues linked to the common man — corruption, unemployment, farmers distress, demonetisation, price rise — and stepped up his efforts to portray the BJP leader as a “friend of the rich”.

He attacked the BJP on national security — a key plank of the ruling party — highlighting how the government had been “silent” on the Chinese build up near the Doklam site and its “failure” over the continued infiltration from Pakistan in Jammu and Kashmir.

Gandhi sought to demolish the perception that Modi was “personally incorruptible” by taking repeated jibes at him over the Rafale fighter jet deal with France. He single-handedly made Rafale deal a national issue through press conferences, tweets and speeches and attacked Modi with “chowkidar is chor” (the guard is the thief) barb.

He travelled abroad to counter Modi’s outreach among the diaspora. Gandhi’s consistent articulation of issues, including job losses caused by demonetisation and the slowing down of economy due to “flawed implementation” of the Goods and Services Tax, seemingly put the government on the defensive.

The GST, which was simplified in the run-up to the Gujarat assembly polls last year, has been further eased after the BJP lost power in Rajasthan, Madhya Pradesh and Chhattisgarh.

Gandhi aggressively clamoured for farm loan waivers and several state governments are likely to opt for the measure before the 2019 general elections.

Gandhi had been attacking Modi earlier too but his elevation as party chief sharpnened his attacks. Simultaneously, he addressed organisational issues, effecting changes in his team at the All India Congress Committee to create a combination of experience and youth.

Thus, the Old Guard, including Ambika Soni, Ahmed Patel and Motilal Vora are part of the AICC team that also has several young leaders such as Jitendra Singh and R.P.N. Singh as in-charge of states. Gandhi strove to give the party general secretaries one state each to bring more focus on their work and ensured that party secretaries, mostly young leaders, were given specific responsibilities.

Realising that the Congress would need as much support as possible to oust the BJP-led National Democratic Alliance from power, Gandhi changed the Congress stance of projecting him as the prime ministerial candidate for the 2019 elections and said the decision will be taken after the polls.

He has been interacting with opposition leaders to build a common platform against the Modi government, a role which was initially perceived to be that of his mother and UPA chairpeson Sonia Gandhi.

To improve the party’s outreach among the vast informal sector, he created All India Unorganised Workers Congress. He also strengthened party’s efforts to get the support of youth, women, professionals, fishermen, tribaIs and scheduled castes.

A Data Analytics Department was created to study voters, workers and ground-level issues in a better way.

The thought to detail in working of the party is evident from the way All India Unorganised Workers Congress has been shaped with separate coordinators for NGOs and government projects, legal matters, auto rickshaw, rickshaw pullers, construction workers, the self-employed and domestic workers.

Gandhi also reached out to people directly through the social media.

“You cannot control social media. Gandhi has been gaining followers and his messages and posts are widely followed. Earlier BJP was setting the agenda and Congress was responding but now it is the reverse,” a Congress leader who did not want to be identified said.

As party chief, Gandhi has run far more elaborate and sustained assembly election campaigns than did Sonia Gandhi, who helmed the Congress for 19 years.

He sprang a surprise in his efforts to project the BJP as divisive and made its leaders angry when he walked to Modi during the debate on no-confidence motion in the Lok Sabha and hugged him.

He also openly said that BJP leaders may call him “pappu” but he does not hate the party.

Realising how the Congress could not form governments in Goa and Manipur despite being the single-largest party, Gandhi moved swiftly in Karnataka earlier this year and entered into alliance with Janata Dal-Secular to keep the BJP out of power.

But the challenges that remain for him are herculean.

The Congress lost six assembly elections this year – Telangana, Mizoram, Tripura, Meghalaya, Nagaland – despite the three wins in Hindi heartland and managing to be a partner of the ruling coalition in Karnataka. It is not in power in any state in the northeast, a party stronghold only four years ago. It is weak in the crucial states of Uttar Pradesh, Bihar, Andhra Pradesh, Tamil Nadu and West Bengal and needs allies to win seats.

Next year is likely to be a make or break year for Congress, as the country goes to general polls.

(Prashant Sood can be contacted at [email protected])